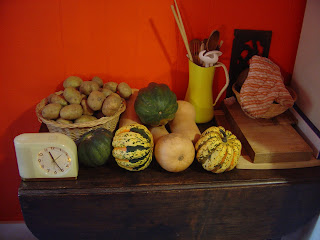 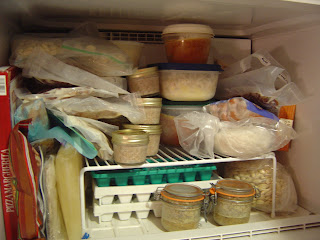 Only a handful of days to go and I suppose we're as ready as we're going to get. Now I find I am confronting the urge to put up large quantities of food to feed myself and Chad as we look forward to (doing not much other than) feeding our new little one. My good friend Anne and I recently butchered and prepared a dozen organic ducks she'd ordered (if you don't know Anne, she is a 21st-century woman who would be entirely at home in the 18th or 19th century; she makes just about everything she eats from scratch: prosciutto, bacon, cheeses, sausage, stock, applesauce and cider (varietal of course), buying raw ingredients from local farms using sustainable production methods. In short, she's pretty amazing - the knowledge and talent of an 80 year old cook packed into a 5'2'' 30-year old frame - and if the apocalypse ever comes, I'm heading straight to her basement with its 6 fridges and freezers packed to bursting with amazing food). The dozen ducks were transformed over a period of days...carcasses into stock, fat rendered and packed in pints for frying potatoes and other things, breasts brined and smoked into duck ham or cured into duck prosciutto, legs cured and poached in their fat for duck confit, some shredded into Spanish-flavored rillettes. Oh boy. I also bought two cases of heirloom apples from Anne, who had purchased 20 cases from a farmer in southern Vermont. You won't find any Macintosh or Macouns in this lot. She chose 8 varieties including Esopus Spitzenberger, Ashmeade's Colonel, Black Oxford, Cox's Orange Pippin, Reine des Reinettes, and Belle de Boskoop. They vary widely in texture and acidity...some are really meant more for cooking than eating as is. They're beautiful. Today I think I'll make some squash and apple soup with squash from my friend Ward - a farmer at Hutchin's Farm in Concord. Yum. Gain a few more ounces while you're still all cozy in my belly, baby.
Posted by Mama Reynolds at 11:47 AM

Sigh. I wish I was there with you guys! Thinking many good thoughts for the delivery, and urging the wind to send a name your way!