June is almost over, July is our last month in Massachusetts, and we've started packing for the big move. Today is my last day of work. It's been raining for two weeks straight, but every once in a while the sun comes out and steams up the city. The air is humid and heavy, and I wish it would stop hanging around and do something already.

Emmett has taken an interest in bubble wrap, cardboard boxes, and rolls of tape. 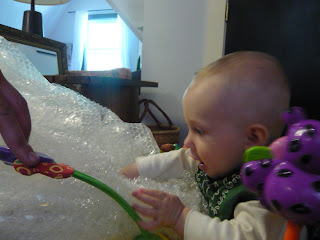 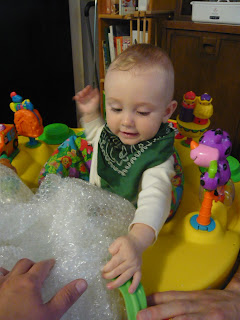 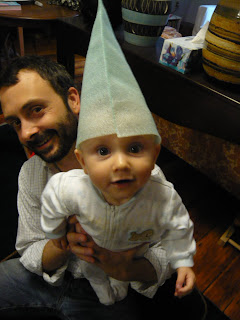 I, on the other hand, have not, and would much rather watch episodes of Battlestar Gallactica. Humanity has been suprise-attacked by the Cylons--brutal, sentient machines that turned on their human creators. The survivors jump around the galaxy on a fleet of spaceships looking for Earth while trying to avoid annihilation. At the end of Season 2.5, they've found a habitable planet hidden from their enemies in a nebula; against the audience's better judgment they decide to abandon their ships and inhabit the planet (New Caprica, they call it) that could become their permanent home.

Two nights ago, after we put Emmett to bed, Emily and I watched the first four episodes of Season Three, in which the humans manage to escape (barely) from Cylon captivity on New Caprica, but sadly the half-human, half-Cylon baby they've been secretly harboring is abducted. Later that night, Emily and I both had long, involved, vivid dreams featuring infants and exodi. I woke up in a sweat, disoriented by the drum of fan, and forgot that a month back we'd transitioned Emmett to the crib.

If you are ever on the cusp of a major life change, I recommend you head to the science fiction section of your local video store. The best movies and shows involve the violent and awkward collision of different species, mindsets, ways of life. A good sf movie is always apocalyptic in the sense that it shows one world ending as another begins.

Ridley Scott's Alien, despite all its stomach-bursting gore and its dark-corridor suspense, is really a long meditation on the consequences of reaching too far. You can't explore the deepest recesses of space without encountering a little contagion every now and then, whether this contagion is an 8-foot tall lizard that has acid for blood and will gestate its young inside your measly little body, or the soul-sucking greed that makes large corporations think their workers are expendable. And this contagion you pick up on your Odyssey home may just follow you for the rest of your life. You cannot overcome this contagion. You must transform it by merging with it. That's why the humans in Battlestar Gallactica were so keen on protecting their half-human, half-Cylon charge: life could never be the way it was before, so they knew that she was the key to their future.

Ray Suarez wrote a book called The Old Neighbood: What We Lost in the Great Suburban Migration: 1966-1999. I found it on the shelf as we were packing our books and have been flipping through it for a week or two. People left the cities in the 1950s thinking that a better life awaited them in the new communities being constructed on old farms at the edge of town. City life was vibrant and active but dirty, cramped, and dangerous, and life in the new suburb would be sterile but clean and spacious. Everything and everyone would look the same, they thought. There we can finally be free, they thought.

Free from what? Cylons? 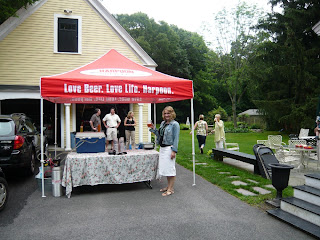 Amid all these humans, Emmett suffered a major case of "stranger danger" anxiety. For example, he cried every time he saw our friend Dan. Gee, I can't imagine why. 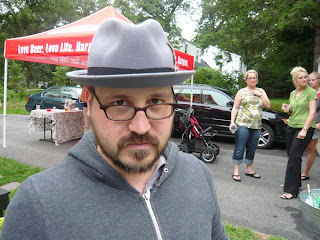 At the party a friend of mine I always see at Boomerangs, JP's thrift store, gave me a book he'd found there that reminded him of me. He even wrote me a little farewell note on the front page. I didn't have the heart to tell him that I'd donated that same book to Boommerangs not three days before. Sometimes the things you choose to leave have a strange way of refusing to be left behind.

In the first three seasons, all Jack from Lost wanted to do was leave the island, but once he left all he wanted was to return. The island is his Battlestar, skipping through time and space.

OMG! Boomerang's. That sounds like something John would do, but I'm pretty sure he's done with giving you books now that you've sold them all to the highest bidding homeless of JP.

John would give away a book and then receive it as a gift? Or give someone a book he or she had just given away? Anyway, the homeless readers of JP are now culturally enriched.

the latter, but I was there and I'm pretty sure it wasn't him.