Emmett rode Boston's T today for the first time. Hard to believe that it took 7 months; I suppose it's because our little neighborhood of Jamaica Plain has everything we need on a daily basis (markets, cafes, thrift stores, libraries, community center, huge botanical garden, etc.). With another local mom and her daughter, we went to check out what the Boston Children's Museum has to offer babes Emmett and Eleanor's age. Eleanor has ridden before, and stood in Rachel's lap grabbing the pole with all the swagger of an experienced commuter. Emmett rubber-necked; there was so much to look at: people of all shapes and sizes and colors, scenery passing in a blur on the other side of the window, signal lights and advertisements and maps. He was in heaven. 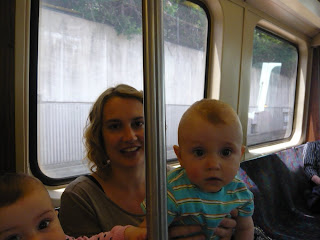 I tried to verbalize to Rachel what it was that I missed so much about taking the T daily (I had been working downtown as a consultant, but was laid-off during my maternity leave). I suppose it constantly reminded me that I am part of a larger civilization. I had to share space with the rest of greater Boston's commuting humanity - come face to face with their quirks, their smells, their voices. We had to treat one another during that time with mutual respect and consideration; often it was even kindness. This is what some people hate about public transport. I say those people - the ones sitting solitary in their climate-controlled cars during rush-hour, and for whom public parks are never as good as one's own fenced-in private yard - have lost a little bit of their humanity. But then I'm prone to hyperbole. 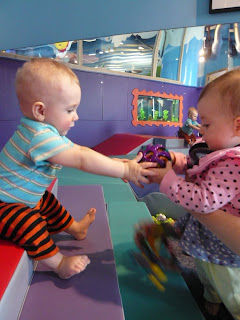 The museum was hoppin' for a weekday. Their dedicated "Play Space" for children under 3 was filled with moms and nannies and their charge, and smelled not-vaguely like poop and pee. In the small infant area, for kids who can't yet walk, most everything was padded, and the walls were mirrored. Emmett ogled the surely-stressed fish in the plexiglass tank, and was nearly swallowed-up by the weird waterbed thingy...but mostly he and Eleanor fought over the cool toys that a thousand other kids before them had pawed and drooled on. It had to be great for their immune systems. 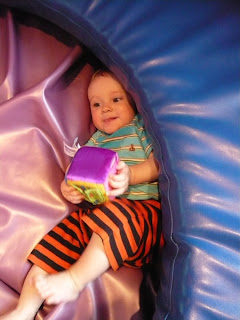 Posted by Mama Reynolds at 6:51 PM

This is an amazing account, honey. I wish I had been there to experience it with you two! Love, Chad