Thank you for your excellent service to Oklahoma City. I grew up in the city and remember watching you on TV and reading your column in the Oklahoma Gazette. I commend you on the wonderful job you've done so far, especially your work to combat obesity by "putting this city on a diet" and your creation of a website to gauge what the citizenry would most like to see on MAPS 3. I have lived in Boston for the past seven years, and so I chose not to participate in that online poll because I wanted it to be an accurate reflection of what the residents of OKC want. But recently my wife and I have decided to move our family (we have a seven-month old son, Emmett...you can see a few pictures of him on this blog) back to Oklahoma City, and we're proud to say that we've purchased an old fixer-upper in a historic neighborhood within walking distance of downtown. We move back in mid-July and can hardly wait.

The opportunity to own a home is only part of what is bringing us back to the city. We are also genuinely excited about the tremendous development that has occurred in the downtown OKC's various districts, including the Central Business District, Bricktown, Midtown, and Arts District, in the fifteen years I've been away. I've lived in some fantastic cities like Cincinnati and Boston, but I'm proud that Oklahoma City is making bold strides to compete with them on many fronts. What with our new NBA team and construction on the Devon Tower starting in October, I think we are poised to become the "Charlotte" of the next decade by seizing the nation's attention and imagination while drastically improving the lives of OKC residents. MAPS 3 gives us this opportunity--if we can get it right.

We need to make viable public transit and a "central park" in the Core-to-Shore development the centerpieces of any MAPS 3 ballot. Here's why. Of the proposals I've heard and read about--including the Convention Center, the river developments, and the State Fair center--public transit and a "central park" are the two components that will send the loudest and clearest signal that Oklahoma City is serious about being an important place to live and work while also positively impacting the city's inhabitants.

Most other cities our size or bigger with professional sports franchises have alternative forms of transportation that are quick and reliable. We only have our bus system, which, as I know from watching online the most recent City Council meeting over which you presided, is woefully underperforming by sending buses around only once every hour and by having too few routes to adequately cover the city. This urgently needs to change--and any transit improvements ought to start with improved and expanded bus service--but we also need to add a modern streetcar route to spur and concentrate development in our urban core. This is both what the Association of Central Oklahoma Government's Fixed Guideway Study suggests we do and what Jeff Bezdek's MTP website shows is feasible to do. We also need to use existing rails and rights-of-way to create commuter rail service to Midwest City. And we need to create rails and rights-of-way to forge commuter service between Guthrie, Edmond, OKC, and Norman. This plan is vital to our future growth as a city, but it will also improve the quality of our air, our roads, and our health.

Since I still live in Boston, I read an editorial by Marc Draisen in the Globe this weekend about the importance of saving the T from ruin. Apparently while taxpayers were spending $14 billion to fund the Big Dig, the T wasn't regularly maintained. Draisen claims that Boston must modernize its transit system now "in order to compete with cities that are building new transit systems in the South and West." Will Oklahoma City be one of these cities that gives Boston a run for its money? I sincerely hope so. I have ridden the T or my bike to work every day for the past two years, because it was easier, cheaper, healthier, and more pleasurable to do so than driving. If you build a transit system in Oklahoma City, you will retain and attract more and more people, like me, who prefer not to be completely car-reliant.

Core-to-Shore is becoming an essential part of MAPS 3, but it must feature a large and dynamic park at its center. I have seen what urban parks can do with a city's residents. I remember spending many weekend days hanging in Cincinnati's Eden Park and in the Boston Common. My wife and I were married in Boston's Public Garden. 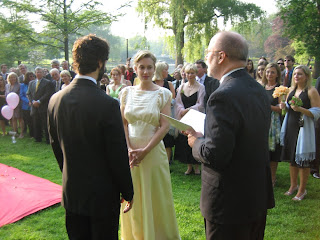 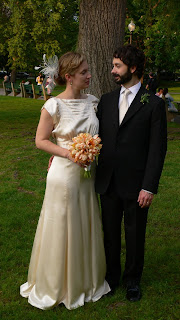 As you can see, it was magical. Oklahoma City needs a place like this. People will use it and love it. Emmett and all his new friends will play there, go to concerts there, play sports there, go to arts festivals there. One day, who knows, maybe he'll decide to get married there.

Thank you for your time and consideration. I look forward to moving back in July and voting on MAPS 3 sometime soon.

I've enjoyed reading the view point of a fellow Oklahoma ex-pat...and I'm sure the stories of your homecoming will be just as great. Congrats on the return.

Thanks, Brandon. I enjoy your blog, too. The photos and stories are fantastic. Drop me a line if you come to OKC and we'll get a drink or coffee.