Emmett has had a cold the past couple of days, and it's brought out the worst in us. Whoever invented the bulb aspirator clearly never had children. You know, this infernal thing:

Imagine two rookie parents trying to subdue a child prone to spasmosis long enough to insert a rubber tip into his nose just far enough to get suction but not too far to do any damage. He howls, we howl, the snot remains lodged in his schnoz. The first thing I'm going to teach Emmett to do--before I teach him to pee in the backyard or rap the lyrics to Bone Thugs-n-Harmony--is blow his nose. We're going to turn it into a sacred ritual. The kleenex box will become the pathway to his liberation, an emblem of free and clear passages.
To breathe easy is the American dream. The Puritans left England because they were congested in the old world by all those immoral plays and lax religious laws; Lewis and Clark bored into the hinterland of the new world like a blast of saline because the bustling life along the frontier had gotten too blocked and stuffy. Imagine the burst of clarity their first unencumbered inhalation of Oregon's salty coastal air must have delivered! Almost enough to ignore the burgeoning awareness that later explorers would decimate and dislodge native people, like Sacagawea, who helped them on their way! If nose-clearing is our American baby's birthright, it is a dubious one, fraught with violence and disaster, and the use of the bulb aspirator represents this checkered heritage. Why must we always drill our way to relief? Drill here! Drill now!
We've heard about the ancient practice of sucking the snot out of a baby's nose (I am sure Sacagawea herself engaged in this practice). When searching for some snot-sucking tips, we came across this magical device: 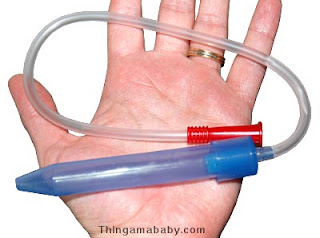 It is the Nose Frida, made in Sweden, which allows you to suck the baby's snot without a) jamming an aspirator in his nose, Lewis-n-Clark style or b) engaging in mouth-to-nose removal of nasal cavity secretions, which to some might be considered "oogy."
Oogy be damned! If it came to it, I'd place my lips on that nose to bring some relief; but if there were a way to avoid it...well, then. The Nose Frida works something like this: 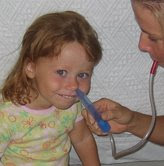 I mean, check out this kid. She loves how easy snot removal has become. Plus, she has a killer scandinavian mullet. You got to give it to the Swedes. If only they had colonized America! Instead of "Manifest Destiny" (look where that's gotten us), we might have had "Manifest Design": instead of a nation of Wal-Marts, we'd be a nation of Ikeas. Instead of silly, frumpy, dowdy, ornamental, or ostentatious, we could have been modest, well-proportioned, in tune with nature, pragmatic.
My point is this: you can tell a lot about a nation by the way its citizens remove their children's snot. Runny noses are inevitable, transnational, global, universal; responses to them vary. If I'm right about this, then what can we learn about the Hungarians from their Baby-Vac? What does it mean when you suck snot with a vacuum cleaner?

Posted by Chad Reynolds at 6:51 AM

I actually have one of these! One thing is clear...it works. I never thought I'd be so excited about a snotsucker but I am, the darn thing is magic. Funny blog, I enjoy reading it.

Okay, this goes just a little too far. . . oh, look at the big dump the little cutie took . . . oh, don't you just love the colors when he throws up . . . oh, isn't so great about all those snots we cleared out?