This morning I drove a van of students to Six Flags. It was raining, the kids were listening to the radio and talking, traffic was moving slowly, I had slept terribly the night before, and I was doing a lot of thinking about the good old days.

I used to pride myself on my ability to survive on five or six hours of sleep. Back in the heydey of Ara Vora, just after I'd graduated from Emerson with an MFA and was teaching high school English in Waltham, I'd practice two nights at week with the band, sometimes until midnight, wake up at 5, write a poem or two for an hour or so, eat breakfast, shower, and head off to work at 7. Emily and I lived in a Somerville apartment that was 325 square feet and cost $795 a month, utilities included. We'd just gotten engaged and were excited about our future. Emily was in graduate school at the time, shuffling between Medford and Chinatown from class to class, writing papers on sustainable agriculture and doing group projects on mouth-watering projects like the history of food. Life was busy, life was good. Ara Vora had at least two shows a month. I slept five hours a night and took naps on the weekend.

But Emily, no matter how busy, always got her solid nine hours of sleep. She had to, or else her day was ruined. When she got pregnant and everybody told us to get our sleep before it was too late, I teased her that she wouldn't be able to hack the sleep deprivation. I, on the other hand, as was well documented, could make it on five hours a night, no problem. Fatherhood, in the sleep department at least, would be a breeze.

I was a zombie the first two months of Emmett's life. A braindead upright grub with arms and a beard. We had a system to get through those nights: Emmett cried for milk; we both woke up; Emily sat in her chair; I picked Emmett up from our co-sleeper and brought him to Emily; she started nursing; I passed out for fifteen minutes; Emily woke me; I grabbed Emmett, brought him to the changing table, changed his diaper, and brought him back to Emily for the other side; I passed out; Emily swaddled him and put him back in the sleeper between us; we went to bed for another hour and a half to two hours; we did it all over again.

One time, somewhere in one of the above steps, I put Emmett's diaper on inside-out. And when asked in the middle of night, I routinely misinformed Emily of the time, because my eyes refused to work from weariness (she had taken her contacts out). No matter how hard I tried, no matter how hard I squinted, I couldn't read the clock, and I have 20-20 vision. In this sorry state, I honestly don't know how I got anything done. But somehow, in my zombiedom, I managed to teach The Turn of the Screw, Ethan Frome, The Great Gatsby, and The Love Song of J. Alfred Prufrock in a span of two months.

It now occurs to me that each of those works features a male character who shuffles around his environment like a ghost.

But then something happened: Emmett suddenly started sleeping longer and longer, until one night he went for almost seven hours. And around his fourth month we instituted a bedtime routine: book at 6:15; bath at 6:30; nursing at 6:45; bed at 7. The bath looked something like this (though this was snapped tonight): 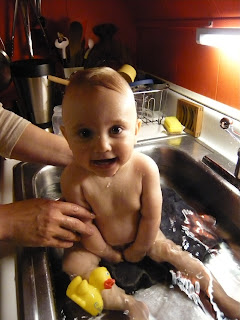 And for about three months Emmett slept like it was his job, only waking up once to nurse. For a little while, I started to feel like the old Chad. The one who could survive on five hours of sleep (the key is getting uninterrupted hours of sleep). I should have known it was too good to last.

Emmett quit his regular sleep job about two weeks ago, and most nights since he's been waking up every two hours or so, crying and wanting to snuggle and nurse. Maybe it's that he's teething (two bottom teeth and one coming in on top!) or that we've started putting him down in his crib; maybe it's that he can roll over onto his stomach but doesn't quite like being there yet; maybe he's experiencing a major growth spurt. Whatever it is, our idyllic sleep routine isn't.

A few parents we know have shared with us their success "sleep-training" their child: after three nights of letting their child "cry it out," their son or daughter learns how to "self-soothe" and begins to sleep through the night. Others we know think it is unrealistic or unnecessary for infants to soothe themselves, and they don't mind waking up as often as possible to tend to their child's needs. As far as I can tell, whether you believe in sleep training or attachment sleeping is the ultimate litmus test, a true measure of one's parenting style, kind of like how one's stance on guns, taxes, and abortion determines one's political stripes. Every parent insists it's a "very personal decision"--which just shows how supercharged the topic is.

Emily doesn't like the idea of not tending to Emmett's needs, even if only for a while, because she doesn't believe it's possible to spoil a child of seven months. But she does think that trust can be violated. And so she doesn't want to sleep train. But for a while, I, the guy who never really cared about sleep, tried to convince Emily to let Emmett cry it out. Now I've changed my mind. I don't want to sleep train anybody.

I changed my mind at 10:15 this morning, when we pulled into the parking lot of Six Flags in Agawam, psyched that it had finally stopped raining, only to discover that the park had been closed for the day due to inclement weather. I felt like Clark W. Griswold. I told the security guard (who sadly didn't have the humor to pull a John Candy and say, "Sorry, folks. Park's closed. The moose out front shoulda toldja.") that I'd give him a thousand dollars if he took us on a roller coaster. But of course he didn't (and I didn't pull a bb gun on him), and so we sat in the parking lot while the lead chaperone made a few phone calls, and watched four or five other buses of school kids come in, find out the bad news, and leave. Dave got off the phone and told us that the Six Flags website says that it stays open during inclement weather. He couldn't believe it wasn't open when the rain had stopped. He figured it was a cynical business move, that the rain had scared everyone but the buses of school kids off, and that the park would have taken a hit if it had stayed open for the day. Our plans had been foiled by weather, desperation, or greed--all forces much bigger than we and our petty concerns.

We stopped for donuts on the way home. And this was almost as good as riding a roller coaster.
Posted by Chad Reynolds at 9:16 PM

You started my day off with much laughter. Just wait till you stay up all night waiting for them to come home from a party..the best is yet to come
ox..fg