A Monster in the Kitchen 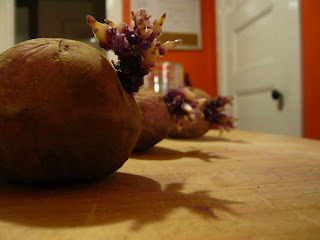 I think I saw a monster in the kitchen, the boy said, pulling the covers over his chin.
How can you tell? asked his father.
It was like a potato but with horrible fangs and eyes, and it was marching across the table at me. 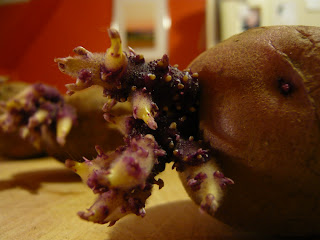 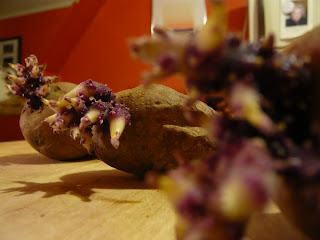 So we do have monsters!
Oh no! Herman is a potatoad! So is Montelle. And there are others that don't have names.
What's a potatoad? We have potatoads?
Oh yes, loads of them. They live in a basket by the fridge.

But what are they? asked the son.

A hybrid species. Half potato, half toad. They live in the ground in fields near swamps or bogs.
Are they mean? Will Herman and Montelle or the rest of them hurt us? 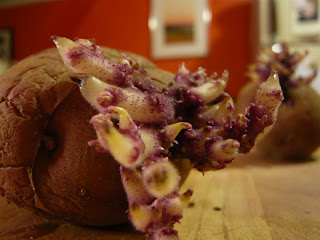 Oh no. They're very tame. If anything, they're afraid of us.
Why?
Because we eat them.
No!
Yes, sometimes.
But why?
It's a fact of life in Oklachusetts. We harvest potatoads from their holes in the ground, and then keep them in the basket next to our fridge
until it's time to eat them. 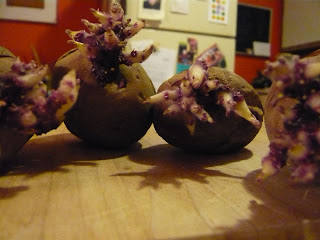 That's not very nice. I don't want to eat a potatoad. I think they're cute, said the little boy, completely forgetting that he had ever thought them monstrous.

It's not that nice. You're correct, son. But they help us to be big and strong.

But why should they die so that we can live?
The father thought for a moment. He was fairly astounded by his son's question.
Well, son, they don't have to. But something has to. If we didn't eat the potatoads, we'd eat something else.
Like Care Bears?
Yes, like Care Bears.
Or arugula?

If we eat arugula and Care Bears, can we stop eating potatoads and make a warming hut for them so they won't freeze?

And keep them as pets.

Our new pets, the potatoads!

But the other two need names!

Do you want to name them? asked the father.

Yes, said the boy. Herman, Montelle, Bluebell, and Pepper who live in a warming hut in the basket next to the fridge in our kitchen. The boy felt cozy and warm inside and fell fast asleep.

Posted by Chad Reynolds at 5:57 AM